Colour Space is a method of defining colours using a numerical system.  There’s lots of crazy colour spaces out there, but lets stick with the ones you are most likely to run across.
RGB

RGB stands for Red, Green and Blue, which are the three primary addative colours.

Addative colours are used when working with light, such as in your computer monitor or  TV.  A blank screen is black and colours are added to produce an image.

Different intensity combinations of these three colours can produce all the other colours of the rainbow.  When all three primary colours are at the same intensity, the result is a shade of grey.

CMYK stands for Cyan, Magenta, Yellow and Black.  These are the primary subtractive colours.  I don’t have a clue why the letter K represents black, but my guess is that they didn’t want to use B for black in case you confuse it with B for blue in RGB space.

These are refered to as subtractive colours because they are used for pigments, such as those you find in a printer.  A blank page starts off as white (all the colours of the rainbow) and pigments are applied to subtract the unwanted colours.

CYMK is mostly used in pre-press aplication and you probably won’t come across it too often in the corse of movie making (except when you’re printing DVD lables of your latest flick:) 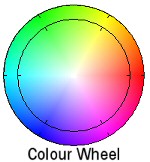 An interesting thing to note is that RGB and CMY are the opposite of each other.

This is a handy thing to know when it comes to colour correcting an image.  For example, if your image is too yellow, it can be cancled out by adding blue (the opposite colour).  And it follows that green counteracts magenta, and red counteracts cyan. 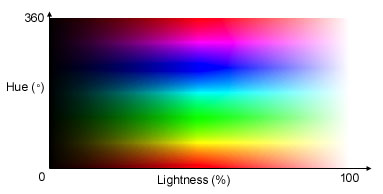 HLS stands for Hue, Luminance and Saturation.  Sometimes the last two letters are swapped (HSL), but it means the exact same thing.

I can’t think of a file format that saves images in HLS space, but you often find it available in most painting programs, because it’s very easy for people to think in terms of HLS.

You can see how it’s simple enough to pick a colour (Hue) and then modify it to the shade (luminance) and saturation you desire.  Easy peasy. 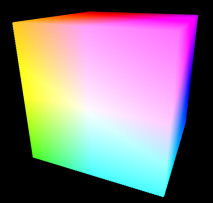 Okay, this colour space is harder to wrap your brain around, but it is found in most digital video formats (including MiniDV) so it’s worth understanding.
First of all, I don’t know why they use the letters Y, U, V (must be some big brain scientific reason).  It’s (a bit) easier if you think of it as Luma, -Red, -Blue (denoted as L,-R,-B).  So excuse me, all you notational purists out there while I continue to use L,-R,-B to explain how YUV works…

L,-R,-B capitalizes on a weakness of human visual perception in order to reduce the amount of data used  to create an image and still give the PERCEPTION of no data loss.  The trick is to save less colour information than you do luminance (brightness) information.  The human eye is more sensitive to luminance than it is to chrominance so you can get away with throwing some of it out. 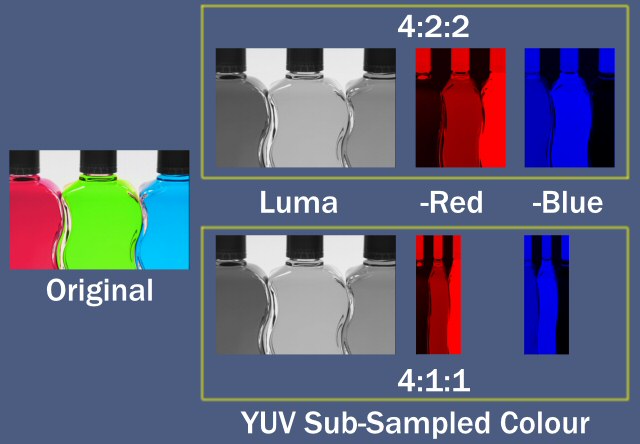 Of course, before the image is actually displayed, the colour info needs to be scaled up to match the resolution of the luma info.

But where is the colour Green in all of this?  Well, it works like this…
The luma info is a grey scale (black & white) image.  White is made up of ALL the colours of the rainbow.  So if you start with white and then subtract red (-R) and subtract blue (-B), what you’re left with is green. Neat, huh?

L,-R,-B (YUV) may seem overly complicated, but (hopefully) now you can see how clever it is in the way it’s geared towards the way human perception works.

Some high end video gear can record in 4:4:4 colour space which means that the colour info in not sub-sampled.  The potentially confusing point is that 4:4:4 is usually YUV space, but sometimes it’s RGB space depending of the equipment specs.