HDV uses MiniDV tapes, but it is otherwise a different beast all together.  HDV info to come. 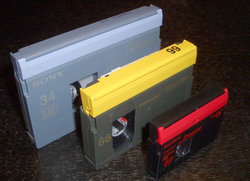 There are some professional flavours of DV (DV-Pro, DVCam, etc.).  Depending on the exact model, the only difference may be the quality of the camera’s optics (lenses).  In other cases, there may be a difference in the size of the video cassette (larger = longer run times), or the speed at which the tape runs (faster = fewer drop outs (errors)).  But, lets stick to MiniDV/Digital8 which both use the exact same codec:  DV  (DV25, if you want to be exact).

The DV codec works in YUV 4:1:1 colour space, which is explained in detail HERE.

The images captured by your camera’s CCD(s) start off as RGB, and then converted to YUV 4:1:1.  Once this is done, a Discrete Cosine Transform is then applied.  Okay, I don’t really know what that means, but you thought I was pretty smart there for a second, didn’t you?  What it does is throw out more info, starting with what you are most likely not going to miss, which tends to be the finer details.

But, of course, colour sub-sampling and loss of fine detail can only be taken so far before it becomes apparent.  DV footage may look nice at first, but a closer look reveals how much “damage” the DV codec does to the original image.

DV compresses data at a ratio of nearly 10 to 1.  Considering that 90% (!) of the image data has been lost, it looks pretty damn good.

Still, this amount of data loss does cause problems for some things such as green/blue screen compositing.  Take a look at this image.  The colour channels have been separated and displayed as greyscale, so you can better see what’s going on.

The DV format is Interlaced and has a lower Field Dominance.  For an explanation of what the hell Interlacing and Field Dominance is, check out the video standards page, comming soon..