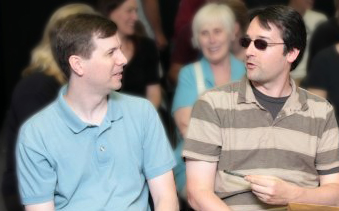 That’s Eric Myles on the left, Rob Paul on the right.

Do you live in Toronto or the surrounding area?
Do you think that Canadian films tend to be rather… lame?
Want to see films made in Canada that are entertaining to watch?
Want to actually have fun by making movies yourself?

Our goal here at 416-Film is to build a local community of Toronto area film makers who want to have FUN making movies.  We’re not looking to revolutionize anything, we’re just tired of seeing the Canadian funding system turn out film after film that we’re not interested in seeing.

This is an exciting time in movie making history.  The amazing digital tools available to the general public these days makes almost anything seem possible on a limited budget.  The excuses for NOT doing something are getting fewer and fewer, so lets get out there and make things happen!

This web site is here to get local area film makers (of all skill levels) communicating with each other in order to pool our resources and experiences, and hopefully, allow us to make movies we wouldn’t be able to achieve on our own.

Though we are concentrating on the Toronto area, anyone from anywhere is welcome to participate in this community.  We want to help anyone interested in making movies.